Book Review: Light of the Stars: Alien Worlds and the Fate of the Earth, Adam Frank 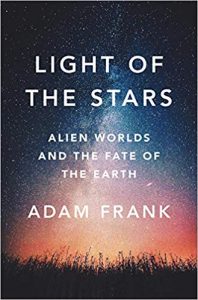 Nonfiction: Light of the Stars: Alien Worlds and the Fate of the Earth, Adam Frank

Light of the Stars could possibly be described as “speculative science.” I don’t know whether that’s a legitimate literary category, but it should be. Adam Frank’s book is nonfiction, a popular science book that puts discoveries in astrophysics, geology, paleontology, climatology, and many other hard sciences into accessible language. But it also examines the possibilities of extraterrestrial intelligence, exploring the odds of other technologically advanced civilizations having existed in the universe. As Frank himself acknowledges, although the math may be sound, right now there is no proof one way or the other. But, he may be right in asserting that thousands of other technological societies must have existed, given the number of exoplanets already discovered and given the resilience of life on our own planet.

Frank’s Light of the Stars is quite wide ranging. He looks at the origin of life on earth. Recent discoveries indicate that the building blocks of life are quite common in the universe. Analysis of space dust shows that many of the same elements found on earth are found in similar percentages beyond our planet. The composition of our planet is far from unique. No other planet quite like earth has been discovered, but neither does it appear that earth is an outlier in the planetary family.

One aspect that does make earth unusual is the prevalence of oxygen. Most planets do not have as much oxygen as our planet does. This is specifically the result of life on earth. That is not to say that any form of life would by definition oxygenate a planet, but the high percentage of the gas in our atmosphere tells the story of life here. It is an interesting story, one which shows a curious give and take between planet and inhabitants. Early life developed the ability to transform sunlight and carbon dioxide into energy, with oxygen as a by-product. As oxygen levels rose in the atmosphere, the atmosphere became toxic to the very life that created it. A new form of life then developed, one that could breathe oxygen and release carbon dioxide back into the atmosphere. The result was a balance in the atmosphere that supported breathable air, and helped regulate temperatures as well. When natural geological processes release more carbon dioxide into the air, life responds by proliferating species that neutralize that carbon dioxide. When too much oxygen threatens to turn the planet into a fiery tinderbox, species which use oxygen flourish until the levels have abated.

This process, though, is neither a thoughtfully designed process nor an immediately reactive one. Over eons there is extraordinary stability which benefits life. Over the lifespan of any given species, though, there is plenty of fluctuation that can result in extinction. The very species that transformed the atmosphere into an oxygen-rich mixture were ultimately poisoned by their own success. Life survived, adapted, even benefited from this transformation. But the species that led the charge were undone by it. This is a not so subtle warning to us humans who through global warming are doing the same thing. Our technology is changing the climate in ways both predictable and unpredictable. Earth and life have survived previous warm periods, arguably flourishing with abundance and variety. However, our species was not around during those warm periods–and there is no absolute guarantee we will survive the warming period we have ourselves initiated.

It is a valid question, though, to ask whether ANY technologically advanced species will alter its planet almost by definition. Technology has defined our species for less than 200 years. During that time we have faced world destruction through both nuclear devastation and climate change. We are not finished with either threat, and it is entirely possible to guess that our technology could create new and different challenges to our own species even if we successfully survive the current challenges. Is it possible that the very creation of technology, like the transformation of the atmosphere through the introduction of biologically generated oxygen, may prove inimical to its creators? If so, then the likelihood of encountering other intelligent species becomes diminishingly small, if for no other reason than our own window of discovery is doomed to be limited.

Unfortunately, unless you accept the recent Harvard paper on the possible nature of interstellar object ʻOumuamua (the paper suggests the object may be a “solar sail”), there is simply no proof right now of any extraterrestrial technology. The absence of proof is not the proof of absence. But despite my strong hope that Frank is correct, I worry that we may not survive our own worst impulses long enough to reach out to the stars.

Do not allow my pessimism to turn you away from an interesting, intelligent, and engaging book. Light of the Stars is a thoughtful and fascinating look at possibilities. It is cautionary, but also hopeful. After all, if indeed there have been thousands or even tens of thousands of technological species in our universe, surely some of them survived their own destructive impulses. Whether we ever meet them or not, the possibility that there is a path through the changes we are wreaking on our planet is a promising thought.

Book Review: Light of the Stars: Alien Worlds and the Fate of the Earth, Adam Frank