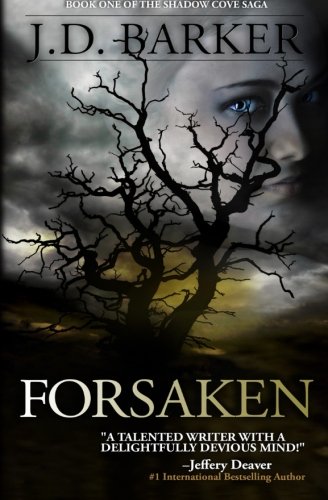 Indie published in 2014, J.D. Barker’s debut novel Forsaken exploded onto the literary stage. Nominated for the Bram Stoker award for best new novelist, Barker was invited by Stoker’s family to cowrite a prequel to Dracula using Stoker’s own notes! Stephen King gave Barker permission to use one of his own characters (from Needful Things) in the novel. Barker has continued writing, moving from his initial foray in the horror genre to less supernatural but equally creepy thrillers in his 4MK series of books, two of which have been published as of 2018.

Forsaken does not read like a debut novel. It is crisp, with well-defined characters and a compelling story line. Thad McAlister lives with his wife Rachael and their daughter Ashley in a home purchased from the proceeds of his best selling novels and the movies they generated. He has just finished his latest book, one which he believes will be his best work yet. His agent has not even seen the book yet, but already the movie rights are in demand and Thad is summoned to New York to meet with his agent and a studio representative to tie things up.

Unknown to Thad, though, dark events are happening within his own home. Rachael is awakened by a mysterious old woman who lays claim to her soon-to-be-born child. Ashley carries on disturbing conversations with her invisible friend Zeke–a friend who has uncanny knowledge of coming events. Just before Thad leaves, they discover that their lawn and trees have died, suddenly, overnight. And along with the mysterious events facing his wife and daughter is a strange thing Thad has not dared to tell anyone: this latest novel of his almost seemed to write itself.

Barker moves the plot along by shifting perspective between Thad, Rachael, and Ashley, occasionally bringing in other characters as well. He also weaves in chapters from Thad’s unpublished novel, revealing the source of the darkness that is connecting his family to events of long ago and an evil that was thought vanquished a quarter of a millennium before. Like his later crime-novels, the technique of moving from character to character and including “written” work from one of the characters is done skillfully and keeps the reader on edge and guessing. Even as the basic core of the plot is revealed, Barker saves some surprises for the end. This is not a horror novel where the good guys clearly win and evil is conquered until next time. Neither, though, is there a clear victory for the forces of darkness. Rather, both sides come away damaged and plenty of room is left for further creepiness to come.

I do not often choose to read horror novels, but I made an exception because the author is visiting my hometown of State College, PA, soon. (November 13th, at Schlow Library.) I have plenty of respect for the genre. Maybe too much respect: they tend to creep me out. If you enjoy horror, you will love Forsaken. It is well-written, full of twists and turns and darkness, and the ending will leave you breathless. Witches and monsters and things that go bump in the night fill this novel. I only hope they don’t fill my dreams tonight!