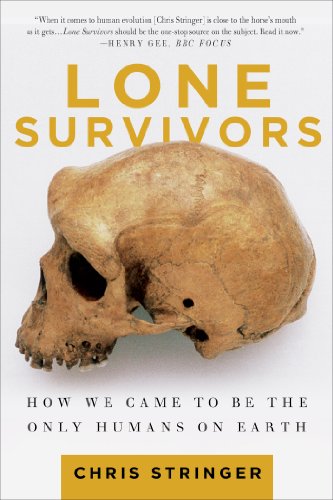 Nonfiction Science: Lone Survivors: How We Came to Be the Only Humans on Earth, Chris Stringer

Chris Stringer’s book Lone Survivors (outside the USA this book is titled The Origin of Our Species) takes a long look at the theories behind human origins. One thing I learned from this book is how unusual a species humans are. Despite the obvious differences in skin color, hair texture and color, facial shape and contours, etc., human DNA is shockingly consistent. There are more differences between groups of chimpanzees in Africa than there are between any two humans. Another difference is that there are no other living human species. Neanderthals and Denisovans and other members of genus homo have been extinct for millennia. There are multiple species of gorilla, chimpanzee, and virtually any other type of organism you could name, but only one species of human. Speaking scientifically, this is highly unusual, and well worth evaluation.

Stringer was one of the first scientists to strongly espouse the ROA theory of human origins. ROA stands for Recently Out of Africa, and alludes to homo sapiens having their beginnings in Africa then spreading around the world from there. Other homo species appear to have developed from a common ancestor in other parts of the world. Neanderthals may have been the most successful other types of humans, both in terms of population size and area, but the fossil record is a challenge for definitive conclusions in this regard. Nor is it certain why the Neanderthals and other human species died out. It is possible they were killed by advancing bands of homo sapiens. Fossil evidence does suggest some died through violence, possibly even cannibalism, and that violence may have come from contemporary modern humans. But it is also possible they were victims of climate change, dietary challenges, or disease. What is now almost indisputable is that sometimes the two groups of humans were not fighters but instead were lovers. Enough Neanderthal (and Denisovan) DNA has been recovered from fossils to determine that modern humans are partially descended from hybrid ancestors. We are not Neanderthal or Denisovan, but some of our genes definitely are.

Lone Survivors often raises more questions than it answers. How did modern humans become so smart? There are proposed possible answers: social living, genetic mutation, dietary changes among them. No one really knows the answer, though. Why did homo sapiens survive when other human species did not? Varied diet, warlike behavior, social cooperation, adaptability, high intelligence? Perhaps, but again, no single answer or group of answers seems to be persuasive. This is not a weakness of the book, though. Stringer is willing to hear out opinions that contradict his own. He gives them fair treatment in the book, and is willing to point out the weaknesses in his own opinions on these and other questions. The reader is left wanting more answers, just as Stringer and other paleoanthropologists are left wanting those same answers. We will all have to wait together while more evidence is compiled and more discoveries are made.

Like many newer science books, Lone Survivors also tells us about some of the scientists involved in this research. Stringer talks about his days as a graduate student traveling through Europe and studying skulls firsthand. He lived out of his vehicle for many months, and later ruefully confesses that modern DNA techniques proved that he left his own DNA on many of these fossils. Another scientist is a member of a band. These personal anecdotes may or may not enhance the research being done, but they help humanize the researchers and add interest to topics that can occasionally challenge with dry jargon and statistical data overload.

Lone Survivors is a thorough, deep book. Written for a general audience, it is not written down to its readers. The author assumes a willingness to challenge assumptions and a desire to learn new information, so he doesn’t shy away from technical data. This means the book is not for every reader, but it definitely is for anyone interested in the scientific questions surrounding human origins and the disappearance of our closest biological relatives.