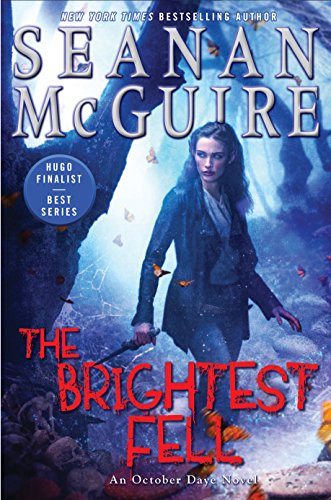 October Daye is part human and part fae. A “changeling,” she constantly lives with one foot in the mortal world and one foot in the fae kingdoms. After years of trying to balance between these worlds, she finally sees hope. Her love, Tybalt, King of the Cats, plans to marry her. Her friends are near and safe. She even gets to attend her own bachelorette party. Everything looks amazing, until her oldest and possibly deadliest enemy resurfaces: her mother.

The request itself is not unusual for a private detective: find a missing daughter. But August has been missing for more than 100 years. And Amandine does not simply ask. She demands. And to make sure October follows through, Amandine kidnaps Tybalt and Jazz, another friend of October. What follows is a dangerous journey through fae and mortal lands looking for someone who may not be alive, relying on an old enemy to provide assistance, and facing challenges that force October to confront questions about who and what she is, and just where she belongs.

Seanan McGuire is one of the hottest writers in science fiction and fantasy. She is a 2018 Hugo finalist for another series she writes, Incryptid. She also writes under the name of Mira Grant, and has had multiple works nominated for the major awards in science fiction and fantasy under that name as well. She won the John W. Campbell award for best new author in 2010, won both the Hugo and Nebula awards in 2013 for her novella Every Heart a Doorway, and also in 2013 became the first person ever to appear 5 times on the same Hugo ballot. Despite her amazing output–or maybe because of it–her writing is crisp, exciting, and full of characters that are deep and surprising.

McGuire’s characters leap fully-formed off the page. They are passionate, infuriating, terrifying, tender, brave and cowardly. They are gay and lesbian and straight. They are human and inhuman. They are like anyone you might meet and unlike anyone you will ever know. October Daye is probably her best known character at this point, and in every book she grows and matures and becomes something new and something more. Some writers might lose their edge after 11 books. If possible, McGuire seems to be just hitting her stride.

McGuire’s plots also challenge. No one escapes a Seanan McGuire novel unharmed–especially her protagonists. She demands a lot from her characters, and she is not afraid to kill even major characters to tell the story.  (Fortunately, she usually doesn’t kill all of them. Well, except in Rolling in the Deep. Spoiler alert: it gets ugly.) The Brightest Fell has sacrifice and redemption, and in a major twist on an ageless theme, in this case one precludes the other. Normally sacrifice consecrates redemption. Seanan McGuire just doesn’t do normal.

You might be able to jump into the series with The Brightest Fell. McGuire is able to backfill the story without getting pedantic. But you will be rewarded by going back to the beginning and catching up. October Daye grows as a character throughout the series. And it is fair to say that Seanan McGuire grows as a writer through the series. Reading as a character matures and as a writer hones her craft can be a very rewarding experience, and the October Daye series is a delightful way to watch both happen.