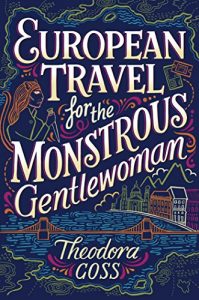 The Strange Case of the Alchemist’s Daughter was one of 2017’s most delightful novels. On the shortlist for the 2018 World Fantasy Award for best novel, Theodora Goss’s tale successfully turned Victorian horror fiction into a celebration of feminism and the triumph of individuals over their circumstances. Its 2018 sequel, European Travel for the Monstrous Gentlewoman, expands on that success and takes the members of the Athena Club on an adventure through Victorian Era Europe that highlights both the power of Goss’s writing and the absolute magic she weaves with her characters.

The main protagonist of both books is Mary Jekyll. The daughter of Dr. Jekyll, Mary is both intelligent and practical. Almost penniless after her mother’s death, she finds herself meeting and befriending an unlikely group of women who end up living with her and helping each other make ends meet and confront the horrors of their own creation. There is Catherine Moreau, a panther transformed into a human woman on the island of Dr. Moreau. Justine Frankenstein, created by Dr. Frankenstein to be the bride of his first creation, is a painter who has greater physical strength than any man. Beatrice Rappaccini was slowly exposed to toxins throughout her young life until she became poisonous to everyone else–including her would-be lover who died. And Diana Hyde, Mary’s half-sister, the daughter of her father’s evil alter-ego, Mr. Hyde. These women come together in the Alchemist’s Daughter, aided by the inimitable Mrs. Poole (Mary’s housekeeper) and by the famous detectives Sherlock Holmes and Dr. John Watson. Together they solve the murders of several women in London, discovering that some of their supposedly dead creators are actually still alive and practicing new experiments.

In European Travel, Mary’s former governess reaches out to her for assistance. She has heard of the Athena Club and enlists their aid in helping Lucinda Van Helsing, who has been imprisoned in an asylum in Vienna. So begins the new adventures of the women, sending them from London to Vienna and then on to Budapest. During their travels they meet other characters we recognize from other works: among them Irene Adler, Sigmund Freud, and Count Dracula. Goss enjoys defying expectations. Heroes/Heroines and villains get new interpretations, and often the true monsters are the most human. The result is surprising, satisfying, and heartwarming.

The stories are ostensibly told by Catherine Moreau, but she has help. Goss brings in other voices through interruptions to the narrative, indented to set them apart. Other characters will comment on the immediate passage (“I was not thinking that!”) or offer a differing opinion or aside about another character (“I should have kicked Diana”). These serve well as comic relief and giving us backstory on the characters that don’t fit neatly into the direct story. There are also several “ads” for the first book (“Only two shillings”) which usually bring objections from Mary (“I don’t think people want to read ads”). Although they are occasionally distracting, usually these interruptions bring a smile and add warmth to the story of these women drawn together by personal trauma and who find in each other mutual support.

I suspect this book might challenge some readers who like their Victorian heroes to be, well, heroes. This book is by a woman and is about women. Men do show up. Usually they are villains. Sometimes they are allies. But the book is not about them. Mary and her friends are quite able to handle themselves, whether facing vampires, spies, or former tormentors. If you have a problem with that…well, you have a problem. The good news, though, is that if you have a problem, the Athena Club has some awesome women who can come to your assistance.

European Travel is a long book–706 pages long! But Goss uses the length to tell a great story in great depth. At the end of the book I almost felt it was too short. I hated to see the story end. The good news, though, is the book sets up another sequel. The Athena Club has more adventures to come, more romps through 1890s Europe, and more monsters who are human (and humans who are monsters) to encounter. Given that the villain in the next book is already revealed to be Dr. Moriarty, it promises to be one that might challenge the most monstrous of gentlewomen.