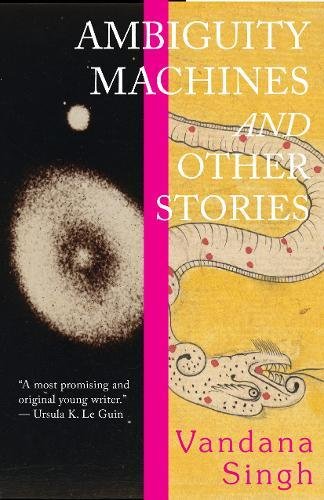 Traveling the stars, riding a current of particles and discovering it is inhabited by living creatures riding the current with you. Plotting to assassinate the king only to learn he is not what you expected. Watching the past through a machine that lets you see it happen, then discovering the machine might also let you make it happen. Traveling to Alaska to gather the effects of your late aunt and uncovering a mystery. These are among the stories told in Vandana Singh’s imaginative collection, Ambiguity Machines and Other Stories.

Singh is originally from New Delhi, India, but in recent years she has made Boston home. She is a professor of physics, with expertise that informs but does not overwhelm her writing. Her stories are rich with the flavors of India and the power of science. Reading them was fun. Her characters have Indian names, eat Indian foods, wear Indian clothes, reference Indian literature and remember Indian gods. Considering that India is the second most populous country on earth (and soon will surpass China for number one) and that India has a vibrant and growing technology and science sector in their economy, the lack of Indian characters in speculative fiction needs to change. Singh’s stories are a valuable addition to the genre even if that were all they did.

Fortunately, they do much more than introduce characters who hail from the subcontinent. They are beautifully written and wonderfully imagined stories. They introduce us to new worlds and new technologies, technologies that let you shape the future by changing the past, technologies that let you move between universes, technologies that let you ride particle waves through space between the stars. They introduce us to an Earth ravaged by climate change. They introduce us to poets and assassins, kings and queens and commoners, scientists and explorers and artists. Singh’s stories are fresh and new, but they convey the richness of a culture that has centuries of history supporting it. Her characters may live on other planets or on a very different Earth than we know, but then we hear them tell each other stories of Hindu gods and goddesses and we remember that those stories deserve retelling as much as the stories that are more familiar to readers in the United States and Europe. Even when her stories are pure imagination–the legends and myths of other planets–they feel rooted in a non-European soil.

Her characters are not just “diverse” because they are non-white. They are different ages and different social strata. They are male and female and non-binary, gay and straight, old and young and in-between, rich and poor, educated and not. Her settings include fancy laboratories and an urban slaughterhouse, spaceships and exotic planets and an Alaskan coastal research facility. Singh shows us imagined futures that include people of all types, and indeed it’s hard to imagine these days that any future would successfully end poverty and corruption and other societal ills that have bedeviled humans throughout history.