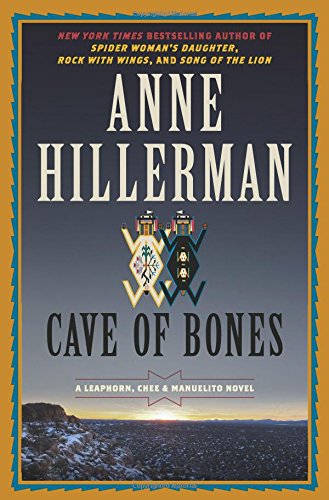 Cave of Bones is the fourth novel by Anne Hillerman set in the Dinetah, the homeland of the Navajo people. Continuing with characters established by her late father, Tony Hillerman, Anne Hillerman succeeds in making this series her own. Joe Leaphorn and Jim Chee are still active characters in her books, but Jim Chee’s wife, Bernadette Manuelito, has become the main protagonist in the books. Cave of Bones may be her best work yet in this series.

Officer Manuelito owes a fellow officer a favor. Therefore, despite her distaste for the task, she is driving to a remote campsite to talk to a group of troubled girls. Upon arriving, though, she is informed that one of the girls and one of the leaders have disappeared. The girl turns up at camp soon after Manuelito, but the counselor cannot be found. The search for this counselor involves much of the book, involving the missing man’s boyfriend and sister, an unpleasant state police officer, and questions about the looting of Native burial sites. Questions also arise about funds for the group that sponsored the trip, questions asked mainly by the mother of the girl who had been missing. Manuelito finds herself in the midst of these mysteries, aided as always by the wisdom and warmth of now retired Lieutenant Joe Leaphorn.

Meanwhile, her husband, Jim Chee, is in training in Santa Fe, where he is charged with checking in on Bernadette’s sometimes wayward sister, Darlene. Chee is also asked to look into a possible missing Navajo man. Soon, he finds himself mixing police work with family responsibilities, and finding both to be challenging.

The result is a complex, interwoven plot that successfully keeps several narratives going simultaneously, then brings them together in a very satisfying ending. Hillerman books, whether written by father Tony or daughter Anne, follow a familiar motif. This is not a criticism–this is part of their attraction to me. They show a deep respect and appreciation for the Navajo people and culture. They celebrate the beauty of New Mexico. They follow the police procedural mystery textbook (if that exists). And they catch the bad guys. There are reasons why shows like Law and Order, CSI, NCIS, etc., are among the most popular shows on TV. Cave of Bones and the other books in this series follow a very similar format and nail it.

If you are a fan of this series, Cave of Bones is a welcome continuation. Using established characters and the eternal Dinetah setting, Anne Hillerman has given us her best work to date. If you are unfamiliar with the series, Cave of Bones stands on its own. It would work well to introduce you to a series that for almost five decades and with two writers has given us a glimpse into the world of the Navajo and the land they love.