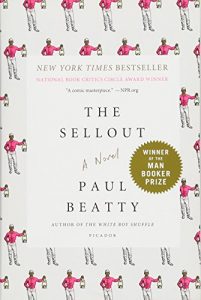 The Sellout is not an easy book to read. It is not an easy book for me to review. It is brilliant. It is moving. It is funny. It is uncomfortable. It is painful. Throughout the novel I was reminded of Jonathan Swift’s “A Modest Proposal,” an essay which satirically suggests Irish parents sell their children as food for the rich so that those children are not a burden to their parents. The Sellout does not tout the gastronomic and economic benefits of cannibalism, but that may be the one forbidden subject that Beatty leaves untouched.

Paul Beatty became the first American to win the Man Booker prize with the publication of The Sellout. The novel also won the National Book Critics Circle Award for fiction in 2015. The book itself is absurdly comic: a black slaveowning farmer in the heart of modern Los Angeles seeks to reinstitute official segregation, and his case goes to the Supreme Court. Yet Beatty himself denies that the book is meant to be funny or even satirical. I tend to agree with him (very generous of me, I know!). The themes of the book are deadly serious, and although the plot is absurd, simply labelling it a comic novel or writing it off as “funny” makes it far too easy to dismiss those themes and fail to appreciate how serious the book is.

I should warn: if you are easily triggered by any number of things, stay away. Beatty’s language is rough, vulgar, and direct. Words usually deemed racist are used constantly and casually. There are blunt descriptions of violence and sex. In the context of the story and the characters, the choices made by the author are appropriate, but they do not make it an easy read. Nor should it be.

The comic elements of this book are easy to see. Beatty’s descriptions of people are seldom flattering and often obscene, but can be hilarious as well. One character’s birthday party involves taking a bus up the 101 highway with the entire staff of a fast food restaurant, a porn actress, and several friends of the character. The party culminates with the bus parking right on the beach, waves lapping at the door, because LA city buses can handle anything. The protagonist raises watermelon, other fruits, and marijuana on his farm. His products are described as good in ways that I won’t repeat, but the comparisons are not ones typically made. From beginning to end, absurdity and strangeness abound.

But make no mistake: this is a serious novel about serious topics. The protagonist “owns” a slave. He does not want to, he did not choose to, and how this happens is described in the book, but the basic reason is that the “slave” wanted to be owned. He believed he was never free in white America, he believed that his blackness deserved to be punished, and the one choice he felt he could make was to be “owned” by his protagonist. Together, he and his “owner” come up with a plan to re-segregate their community. The reason is straightforward: their community is already segregated. Their local school is almost entirely black and Hispanic, their neighborhood is entirely black and brown (a very few Asians provide the diversity), so officially segregating the school was simply putting an imprimatur onto a reality. The law of the land may prohibit “separate yet equal,” but the reality many live with is no better than the legally enforced Jim Crow laws that were struck down years ago. Even in a city as multiethnic as Los Angeles, the reality on the streets is that neighborhoods, businesses, schools, buses, services, and churches are often segregated. Legally, anyone can buy a home anywhere. Legally, any child can attend any school. Legally, every business must serve every customer. The Sellout describes a world much closer to the LA I briefly lived in many years ago: very few cross the invisible lines that divide them. The central act of the protagonist is that he makes those lines visible (he literally draws a line around his community using paint). The question worth asking: if we see a visible line, are we more willing to cross it? The answer posed by the book is a definite “maybe.”

The Sellout is absurd. Ridiculous. Comic. But I didn’t laugh, nor is it meant to create laughter. What it does do, very well, is force the reader to think about racism in new ways. This is neither a comfortable nor a comforting book. Beatty, like his protagonist, is painting a white line around his subject, and challenging his readers to cross that line and see how others live.