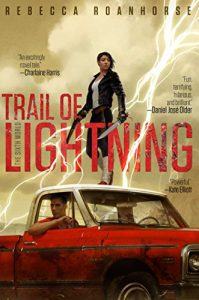 Southwest tribes are known for their traditional weaving skills. I have no idea whether Rebecca Roanhorse can whip out a rug or a blanket on a loom, but when it comes to weaving together Navajo folklore, dystopian sci fi, and kickass adventure, her creation belongs on any fantasy-lover’s shelf. Trail of Lightning has it all: a great story, great characters, a well-constructed and consistent world, and a heroine that can send any monster back home to mommy. If that’s best done by sending them in pieces, so be it.

Maggie has issues. Killing is not one of them. She is good at it. When monsters threaten the Dinetah–the land of the Navajo–she is fearless. When it comes to sorting out her relationships, though, the monsters are not quite so easily vanquished. Her mentor, an immortal hero from Navajo legend, abandoned her a year ago. Sorting out her life has taken the better part of that year, but now a child has been taken by a monster, a creature without a name, and Maggie’s services are required.

I love books that take risks, that go in unexpected directions, that feature complex characters and especially that feature strong women. Trail of Lightning does all of that. The easy, traditional fantasy approach would take awhile to say, “Maggie battled the monster and won, returning the uninjured child to her grateful mother.” Not here. Maggie feels bloodlust and violently, brutally, viciously kills and decapitates the creature. And not to get too detailed lest I require a trigger warning for my own review, there is no rescue and there is no delivery of an uninjured child to her grateful mother.

This begins a journey through the Dinetah where Maggie searches to find the source for this monster and others like it which start to attack Navajo settlements. She is assisted by a young healer who is more than he seems, an old medicine man, and a bartender who lives on the edge of the reservation. During her journey Maggie must face characters from Navajo legend and story including the trickster Coyote, and must face her own demons that often threaten to take hold of her life and twist it out of control.

Rebecca Roanhorse is a Native American author and lawyer. A graduate of Yale, she has already in her young career won a Nebula award and been nominated for the Hugo. Trail of Lightning is the first book in a projected series, with a sequel already scheduled for publication next February. In other words, Roanhorse is a terrific writer at the very beginning of a series that promises to get better. The perfect time to jump in!

The world envisioned for Trail of Lightning is a difficult and dark one. The United States is essentially gone, devastated by climate change and by the New Madrid fault splitting the nation and allowing the ocean to cover most of the interior. These physical changes also opened doors for ancient beings to resurface, and the old gods and devils, heroes and monsters, are once again participating in the lives of the “five fingered ones,” i.e. humans. Their release, though, has also awakened powers long latent in the Native people, powers which allow humans to compete more evenly with these ancient beings. Roanhorse is in many ways reinterpreting Navajo folklore for a new generation along the lines Rick Riordan has done with Greek, Roman, Norse, and Egyptian folklore–though the high gore and body count in Trail of Lightning should keep it off of the YA shelves at your local library.

Not a criticism, but it is fair to warn sensitive readers that if you are triggered by horror blood and gore, this is not the right book for you. If you like your fantasy with a touch of horror, if you enjoy seeing a different culture expressed in literature, if you enjoy a heroine who knows how to use a blade, Trail of Lightning delivers a rich tapestry to anyone who buys it.