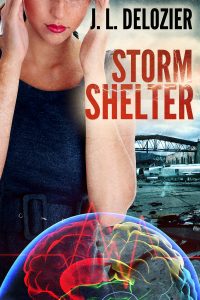 Storm Shelter is a prequel novel to J.L. Delozier’s debut thriller, Type and Cross. Protagonist Persephone “Seph” Smith is a psychologist with the V.A. She also gets deployed during emergencies to crisis areas. A pending hurricane sends her from her home in Philadelphia to a shelter in Texas, but she quickly finds that the hurricane is the least of the problems facing the team and the evacuees.

Soon after the storm arrives, strange things begin happening. A volunteer with diabetes has a blood sugar crisis, despite wearing his insulin pump. At first this seems like a normal deviation for someone under stress, but the behaviors and emotions of both staff and evacuees seem off, more than can be explained by just the storm. Then, a cook is viciously murdered. As Seph and the other staff look for the murderer, they realize it is only the beginning. Something terrible is happening inside the shelter, and no one is safe.

Seph finds that it is difficult to know who to trust and who is affected by the mysterious problems. The team leader is a doctor with a hair-trigger temper. The head of security is a Bronx native without a lot of experience. The priest is a little too fascinated with women’s feet. With these allies, confronting the challenges posed by the evacuees is hard enough. The evacuees include two half-brother gangsters with Aryan leanings, a vietnam veteran with mental issues, a pedophile cowboy, and a hooker with a fondness for yellow. As you can tell by the descriptions, Delozier brings in a wonderful collection of secondary characters to add flavor to the story.

Storm Shelter is Delozier’s (and Seph Smith’s) second book, but it’s easy to see why the author recommends reading this one first. It takes place about a decade before the events in Type and Cross. Smith is younger, in a different place in her career, and in a different place in her life. She is less sure of herself, less experienced in trusting her gut, and less able to lead others to follow her. In Storm Shelter, though, she begins to find the toughness we see more fully developed in Type and Cross. Throughout the book we see her grow, become willing to step up when she is needed, and by the end take charge and become the leader her team needs.

Delozier’s own experience as a doctor helping in emergency situations shows in her writing. Storm Shelter  is full of small details that make the situation more real. The team suffers from exhaustion as the week progresses. The coffee is awful, the food is bad, and they can’t get clean. Their appearance suffers as their tiredness increases. People make poor decisions, tempers are frayed, and the characters reveal more about themselves in their exhaustion than they do when they are more in control of themselves. I suspect that this is reflective of reality in those situations–though hopefully without a similar body count!

Storm Shelter is not a long book, but it is a tight thriller with a dramatic conclusion. Seph Smith is a heroine worth following. I hope that Dr. Delozier has many more sequels–or prequels–to come.