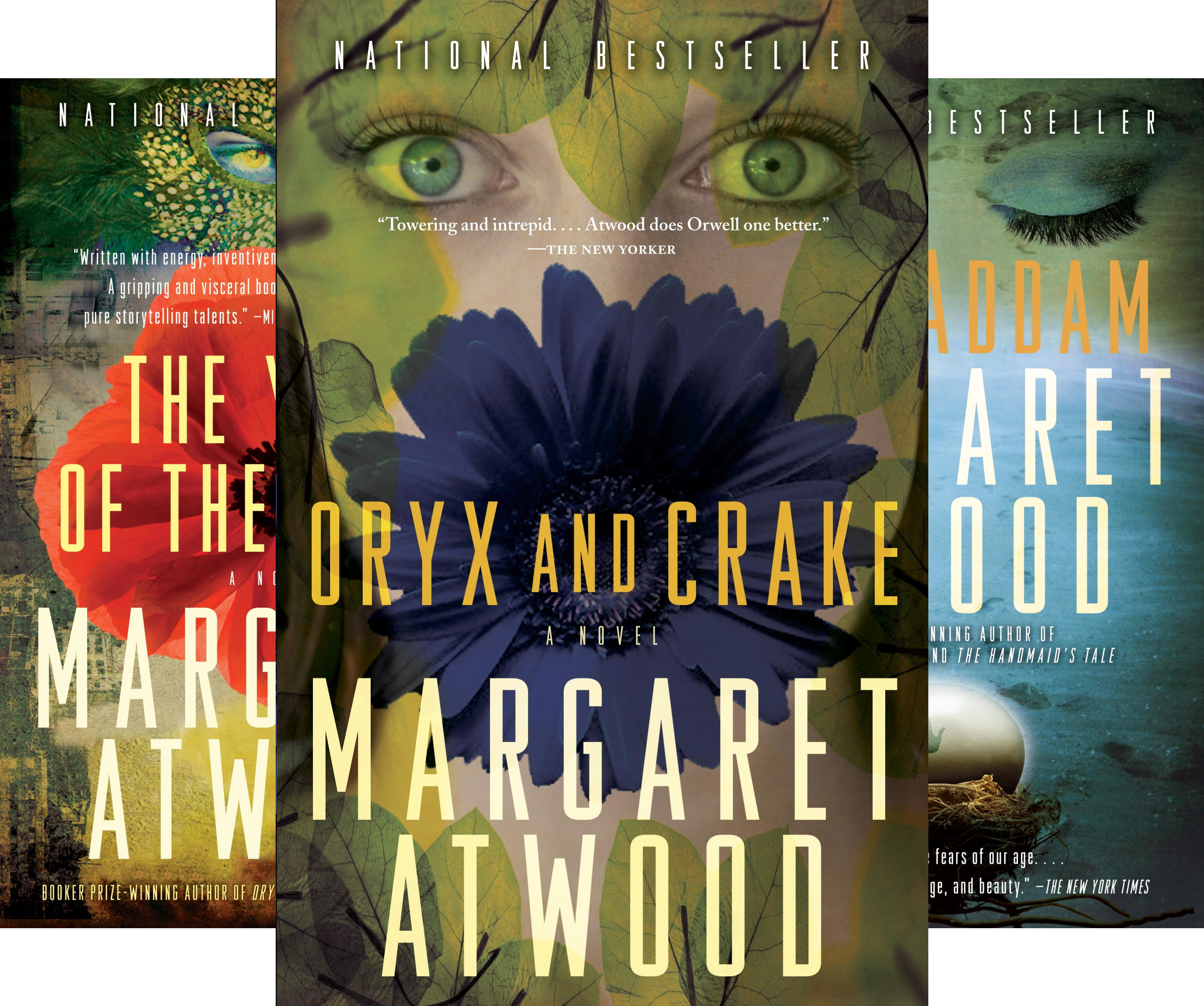 MaddAddam Trilogy: Oryx and Crake, The Year of the Flood, MaddAddam

What can be said about Margaret Atwood that has not already been said? Winner of the Booker Prize, perennial finalist for the Nobel Prize for Literature, author of poetry, fiction, non-fiction. Margaret Atwood is one of the greatest living writers in the world today. With current television series inspired by her works The Handmaid’s Tale and Alias Grace airing on Hulu and Netflix, she may be more well-known and well-loved than at any previous point in her amazing career.

Her MaddAddam Trilogy takes place in a future dystopian world that is vividly drawn and frighteningly believable. Many of the characters are in all three books, but the books are not set sequentially and the stories stand very well on their own. Oryx and Crake tells the story of Snowman. Known as “Jimmy” before the plague that destroyed most of humanity, Snowman thinks he may be the last human left alive. He has been put in charge of watching over the “Crakers,” a group of genetically modified humans who were designed by his friend, Crake. The Crakers are a simple people. They know they were created by Crake. They remember their first teacher, Oryx. They know that Snowman is their friend, sent by Crake to tell them stories. But Crake designed them with limited intelligence, believing that high intelligence was one of the problems of humanity. The story unfolds in two ways, with Snowman telling the Crakers a version of history that they can grasp, and with Jimmy remembering his life and his relationships with his best friend Glenn–later known as Crake–and the woman they both loved who took the name of Oryx. Crake and Oryx is unsparing. Jimmy does not look at his life heroically. He is an indifferent student, his family stinks, and he is emotionally distant and cruel toward women. Glenn/Crake is brilliant but cold, dismissive toward most people and disgusted with humanity as a species. The story of how Jimmy became involved with Crake’s experiments is revealed gradually, as Jimmy reflects on his own childhood and adolescence, as he tells fanciful tales to the Crakers, and as he prepares to leave the Crakers in search of food and supplies that he needs to stay alive. Through most of the book we are uncertain whether Jimmy/Snowman is the last remaining human. The book ends, though, with Jimmy learning that a small group of other survivors passed through the Crakers’ village while he was away. He follows their trail, uncertain whether these fellow survivors may be a threat to the Crakers.

The Year of the Flood is set in the same world, but is a very different book. Told from two perspectives, it jumps back and forth between characters and time, each section introduced by a sermon and a hymn from the “God’s Gardeners” religious sect that flourished shortly before the plague began. Ren is a dancer and prostitute in a men’s club. She spent part of her childhood with the God’s Gardeners sect, where she became friends with Amanda. At different times both she and Amanda dated Jimmy, the protagonist of Oryx and Crake. Toby did not completely buy into the doctrines of God’s Gardeners, but she appreciated their help rescuing her from a dangerous situation and became one of their leaders. Ren and Toby’s stories intertwine, and also connect them with Snowman/Jimmy, Crake/Glenn, and the events introduced in Oryx and Crake. Their perspective, though, is different. Pre-plague society stratified into wealthy compounds inhabited by employees of high-tech companies and the “pleeblands,” inhabited by ordinary people. The pleeblands were poor, gang-riddled, and dangerous. Jimmy and Glenn grew up in the wealthy, high-tech compounds. God’s Gardeners were in the pleeblands, as were Toby and Ren through most of the story. There were some limited opportunities to move between the two strata, and Toby and Ren do spend time in both, but the perspective of this book is clearly a view from the bottom. When the plague strikes, both are fortunate to be isolated and avoid infection. Eventually they find each other and go after Amanda, who has been captured by some ex-cons who also survived the plague. They find her with her captors at the same time as Jimmy shows up. We learn then that this was the group Jimmy was pursuing also, and realize that they are indeed a threat to the Crakers and to any other survivors they might prey upon.

MaddAddam moves the story forward in time. Toby is the main character, but we also learn the story of her companion, Zeb, and the story of the beginnings of God’s Gardeners. Zeb was also one of the leaders of God’s Gardeners, and through his story we learn more about the group and its founder, Adam. MaddAddam revisits much of the same time period as the previous books, this time through Zeb’s story, but it also moves forward as a band of humans and the Crakers come together to create a new type of community. Toby also takes over for the injured Snowman/Jimmy as the narrator of stories for the Crakers. This book has a great deal more humor in it than the other two books, as Toby finds her way through telling stories to people who like to interrupt with questions, songs, and other challenges.

Margaret Atwood describes her work as “speculative fiction,” differentiating it from “science fiction.” Her distinction is controversial, but very important to her. Science fiction (to her) involves stories about things that can’t happen yet. Interstellar travel, time travel, or aliens may or may not ever be possible, but they are not possible yet. Speculative fiction, by comparison, involves stories of things that actually could happen. Climate change is happening. Pollution is happening. Plagues have happened, and genetically engineered plagues (and animals and people) are real possibilities based on current technology.

I am not convinced there is a bright red line distinguishing “science fiction” from “speculative fiction,” but if she is writing about a world that might happen, it is chilling. The world of MaddAddam is terrible before the plague. Much of the world has been altered through global warming, with major coastal cities flooded and large swaths of agricultural land desertified. Pollution has made air in many cities almost toxic. Greed and corruption have sharply separated the haves and have nots. The plague does indeed clear pollution from the air rather quickly, but survivors struggle to find food. Not every human who survived the plague is willing to work together–those who were criminals before do not change their character after. This is a dark and dangerous world, and the trilogy does not end with “and they lived happily ever after.”

Not everyone will enjoy this trilogy, but it is well worth the time to read it. Margaret Atwood has an extraordinary gift with language. Her prose is often beautiful but can also be spare and blunt when it needs to be, utterly hilarious in one chapter and wrenchingly painful in the next. Each of the three books is different enough that they could be mistaken for works from three authors, yet they are also seamlessly woven together into one inseparable story. The story itself is frighteningly realistic. Atwood may not write about aliens, but her monsters are all the more real because they are the monsters we rightfully fear the most: those that dwell in the hearts of humans.