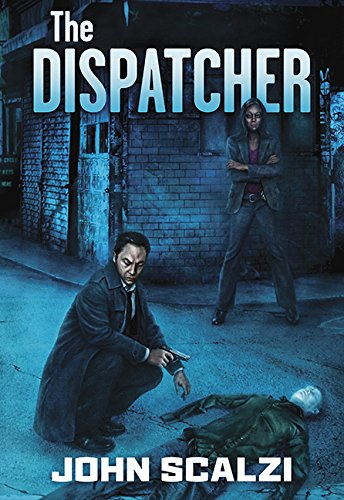 Part fantasy, part science fiction, part mystery, and all Scalzi. The Dispatcher is set in a near future when the rules of death have changed. People no longer die violently. For reasons no one understands, with no warning or preparation, violent death just stopped.

Tony Valdez is a “dispatcher” in Chicago. If someone is nearing death from natural causes, it is his job to kill them. Quickly, violently, and legally. When someone is killed like this, 999 out of 1000 times their body disappears from the site and they immediately wake up naked in their own bed. Death is still possible from natural causes and from suicide, but murder is next to impossible. Shoot or stab someone and their body resets to the state it was in roughly twelve hours before–and they find themselves at home, memories intact, in need of new clothes.

Dispatchers legally work in hospitals and limited other venues. If an operation goes wrong, the patient is killed by the dispatcher and wakes up at home. However, there is a demand for their services as well in less legal settings. Fight clubs now feature deadly weapons; dispatchers make sure that the severely injured are reset to fight another day. Young rich men have started dueling again, using swords to maim each other for real and perceived slights. Rather than face lifelong crippling injuries, the dispatcher makes sure that the healthy walk home, and the wounded…wake up at home. No one knows how this works. No one knows why this works. But it works almost every time.

Valdez is called in to help the police solve a mystery. A fellow dispatcher has disappeared. Clearly he has not been murdered, as his body has not reappeared at home. But equally clearly, something has happened to him. Police found signs of a struggle at his home, along with some blood. The only lead they have is his occasional involvement in services on the grayer side of the law. Valdez may have been the last person to speak with him before he was taken, and his knowledge of the ins and outs of dispatching on both sides of the law makes him valuable to the police detective working the case.

In this short (130 pages) novella, Scalzi raises a number of interesting questions about life and death. How does police work change when murder is no longer easy? How does crime change? If violence does not result in death, is killing someone who is about to die from natural causes giving them a second chance? At what point should we let someone go? And if you cannot murder someone in the old fashioned way, how can you successfully murder someone? These questions challenge us in these days when violence easily leads to death, but the questions and the answers both change when death is no longer a natural consequence of violence.

Another reason to read Scalzi: characters representing different populations. Tony Valdez is an urban Chicago hispanic, not a group typically chosen for the protagonist of a science fiction story. Detective Nona Langdon is an African American woman. Although their personal characteristics are not central to the story, it is refreshing to see characters in books that reflect the reality of our multi-ethnic society. The easy choice for an author is to write characters that look and sound like her or him. John Scalzi often chooses to take the more difficult and rewarding choice of populating his fictional worlds with the same type of people we see in the real world. This adds a layer of realism to a book with a very fantastical premise.

The Dispatcher is a quick read. Although it is short, it is packed tightly with plot, characters, dialog, and intriguing ideas. I easily read it in one afternoon, but I suspect story will come back to my thoughts again and again like a dispatched character from the story.