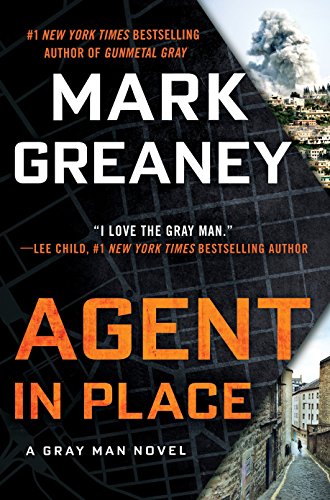 The Gray Man is back. Courtland Gentry is an assassin. After years running from the CIA, he has made his peace with them and even worked for them in Asia. But not all went well with that op, and he fears he may have lost some of his edge when he developed feelings for a Russian agent he met. So Gentry takes a job capturing the mistress of the Syrian president. Although she is guarded by elite Syrian forces, this is the Gray Man. What could go wrong? Plenty!

Agent in Place takes us from Paris to Damascus in a thriller that grips you from the first page and refuses to let go until the last. In this seventh installment of his Gray Man series, Mark Greaney shows us the hardened mercenary we have come to know already. But this version of the Gray Man has found some softness. Gentry has always fought for what he deemed to be “right.” He killed people who deserved to be killed, he spared the innocent and the bystanders, and he refused jobs that did not meet his standards. So, when he is offered a job by Syrian opposition forces in exile to strike a blow against the mass murderer in charge of the country by capturing his mistress, he accepts. The plan is to free her from his clutches so she can testify to his double-crossing the Russians, thus removing his support from his primary backers. But there is a small complication: her four-month old son is still in Damascus. She will not speak out until he is safe, and only the Gray Man has the tools and the courage to rescue the child.

Mark Greaney is an expert in weaving a complicated plot that still manages to stay tied together. Agent in Place also shows us some new sides to a familiar character. Gentry does not know anything about children, especially babies. Facing Syrian intelligence agents and special forces, he is completely flummoxed by the formula needs of the infant. It does not occur to him that traveling with a baby means packing diapers. It also shows glimpses of wit. Deep in the Syrian desert, surrounded by fighters from many sides, he complains that his travel agent had told him he was heading to a “clothing optional” resort. Still, for those who go into the book looking for action, there is plenty to satisfy.

I was surprised by one major plot twist which seemed to rely completely on luck, or perhaps deus ex machina. Greaney is a good enough writer to make it work, but I have to admit that seeing Gentry get bailed out of a hopeless situation by getting unexpectedly captured by good guys felt a bit contrived. I suppose that occasionally even the Gray Man deserves a little bit of good luck–he certainly has more than his share of bad luck–but when a character known for using his wits, his skills, and more than a little violence to get out of trouble is accidentally captured by actual allies in the midst of the Syrian civil war, it was a bit disconcerting.

Mark Greaney puts a lot into his novels. He has degrees in political science and international relations, both of which play major roles in all of his books. In preparation for his novels, Greaney has traveled to dozens of countries, interviewed leaders at the Pentagon, and taken training in weapons and combat from actual military trainers. The preparation shows, as his locations feel authentic, the descriptions of combat are intense and heart pounding, and the politics and international intrigue feels pulled from the headlines.

All in all, it was a typically satisfying Greaney novel. The good guy won, taking out a bunch of bad guys, and the Agent in Place was indeed in the right place and at the right time. Not a bad beach read.