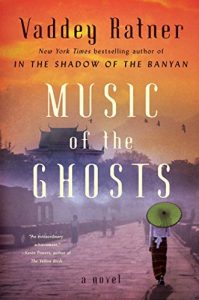 Vaddey Ratner calls her second novel, Music of the Ghosts, “a story of survivors.” It is a deep, thoughtful, heartfelt story of two people whose journey to escape the killing fields of Cambodia is still fraught with danger and tragedy, even decades after the regime was overthrown.

Teera is a young woman who escaped Cambodia as a child with her aunt. They were the only two of a large extended family to survive. Teera’s aunt raised her and guided her through high school in Minnesota, college at Cornell, and then back again to Minnesota. Many years later, though, her aunt contracted cancer and died soon after the diagnosis. Among her dying wishes was for part of her ashes to be returned to Cambodia, to the temple in Phnom Penh she had helped raise money to rebuild. The building was dedicated to the memory of Teera’s father, a musician in pre-war Cambodia. More than a little lost after the death of this central person in her world, Teera returns to Cambodia to honor her aunt’s wishes…and to meet an old musician who has sent her a mysterious letter.

Tun remained in Cambodia after the war. He lost everyone and everything. One of the few who survived his imprisonment, he had been held with Teera’s father near the end of the war. Tun had also been a musician, and the two men were familiar with each other before the war. While they were imprisoned together, Teera’s father entrusted Tun with the location of three musical instruments he had made by hand. Although they were not of any particular value, they were literally the only things he had left, and he asked Tun to find his daughter and give them to her. Tun had returned to Phnom Penh many years after the war looking for any signs of his friend’s family–and found the temple. There, the broken and crippled man was given a home and the opportunity to play his music. Eventually, he managed to write Teera, telling her of the instruments and of his friendship with her father.

Shifting back and forth between these two characters, author Vaddey Ratner brings us into a Cambodia that still struggles with its past. Everyone who survived the Khmer Rouge period was a victim–but many of the victims were also victimizers. Tun started the war as a soldier for the Khmer Rouge. During one of the purges, though, his loyalty was questioned. His daughter was raped and murdered, and he was thrown into prison. Under torture he gave up names of people he knew. Some of those people were subsequently imprisoned, tortured, and executed. Whether this was because he gave up their names or not is unknowable–the “Organization” was arresting and killing people under any pretext, so it’s quite possible the names he gave were given up by other people as well, or that they would have been captured for other reasons. But the guilt he feels is real.

This is a reality for the actual Cambodia as well. What do you do with people who fought in the war? Most of the soldiers who fought against the Khmer Rouge were killed. But many of those who fought for the Khmer Rouge were killed or imprisoned and tortured by the regime itself. Should those people be held accountable for bringing Pol Pot to power? Or was their own experience at his hands enough punishment? Tun is physically and mentally shattered after the war. His family is dead, his body is broken, and his mind is haunted by his crimes. Yet he feels that he should be held more accountable. Ratner ultimately leaves that to the reader to judge.

Also see by the same author – Book Review: In the Shadow of the Banyan, Vaddey Ratner