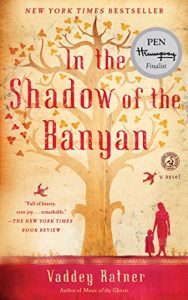 Historical Fiction: In the Shadow of the Banyan, Vaddey Ratner

In the Shadow of the Banyan is a beautiful, haunting, exquisite story that will live in my heart for a long, long time. “War entered my childhood world not with the blasts of rockets and bombs but with my father’s footsteps as he walked through the hallway, passing my bedroom toward his.” Gripping the reader from that first sentence, Vaddey Ratner takes us back to 1970s Cambodia. Told from the perspective of seven-year old Raami, we follow her family from their home in Phnom Penh to exile in the countryside and then from exile to forced labor. It is a story of survival more than triumph, and not everyone in her family survives.

The Khmer Rouge killed hundreds of thousands of their own people. Some estimates are over two million deaths during their four-year rule. Many were executed for supporting the former regime. Many more were worked to death or died of starvation in forced labor camps. Others became sick and died from inadequate or non-existent medical care. Raami is witness to every form of death and atrocity visited by the “Organization,” the term the regime used to describe itself. She herself is forced to labor, prohibited from going to school, taught to forget her past and serve the revolution. Although she holds onto the memories of her childhood including the poems and stories of her father, her spirit and her body are brutalized by misuse.

Yet, Raami is resilient. In the face of death, abuse, loss, illness, forced labor, and every other imaginable horror visited on her and her family, she continues. Despite there being no reason to hope, Raami lives. Despite every reason to lose her ability to love, Raami loves. As much as it is the story of one little girl, In the Shadow of the Banyan is the story of the Cambodian people. Brutalized and forsaken, both she and they survived.

There was a time, not too many years ago, when America was a place of hope for refugees and other victims of brutal regimes. Author Vaddey Ratner was a little girl in the “killing fields” of Cambodia. She, like her character, survived those days and came to America. Ratner arrived as a refugee in 1981 not knowing English. In 1990, she graduated as valedictorian of her high school class and went to Cornell, where she graduated summa cum laude. In these days when this country seems to have strayed from that vision of being a country of immigrants, perhaps this book can remind us why an America that stands for freedom for the oppressed and hope for the persecuted is so important.

Ratner may have arrived not knowing English, but she has become a master of the language. Her prose is achingly beautiful. She spends paragraphs describing rain, then compares that rain to the sorrow expressed by her mother. One character tells the story behind his shaved head and his scars, describing in detail how he obtained those scars to save his family–and how it ultimately did not matter. Ratner weaves Cambodian folk tales into the story through poetic retellings by Raami’s father and through more traditional stories told by peasants and servants Raami meets. These details bring light to the darkness of the story.