Book Review: This Explains Everything: Deep, Beautiful, and Elegant Theories of How the World Works, Edited by John Brockman 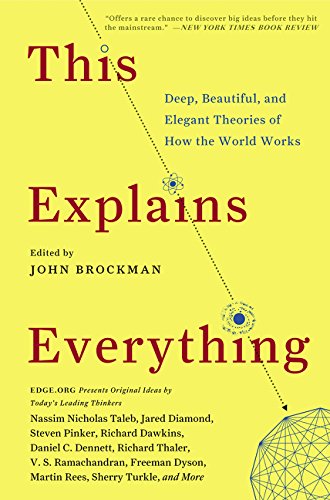 John Brockman is the founder of the Reality Club, a gathering of thinkers and intellectuals that met in restaurants and other locations from 1981-1996. In 1997, the Reality Club went online and became Edge.org. Each year, a question is posed to the contributors, a question intended to provoke discussion, debate, and most of all, thought. The Edge question for 2012 was, “What is your favorite deep, elegant, or beautiful explanation?” The responses to that question were culled, edited, and became the book, “This Explains Everything.”

The list of contributors to this book is amazing. Several are Nobel Prize winners. Others are famous intellectuals, including Steven Pinker, Jared Diamond, and Richard Dawkins. Many are professors in top universities around the world. Musicians, filmmakers, philosophers, psychologists, artists, scientists, writers…it is a truly astounding collection of brilliant persons who spent time on this question. And the approaches they took to the question are as varied as the disciplines they represent. Most of the essays are two-three pages long. A few are longer (I didn’t specifically count, but I don’t think any reached eight pages). Many are shorter. The very shortest is “Occam’s Razor,” by Katinka Matson: “.” (The strikethrough is in the original.) She succeeded.

Some theories had several fans among the authors. Perspectives on evolution, natural selection, and other Darwinian themes were addressed by a number of authors. The double helix (DNA) takes its place, as do some odes to quantum theory, Einstein, and “the big bang.” Others are perhaps less well known, but the authors are enthusiastic in their advocacy. The “Law of Unintended Consequences” explores how almost any action in a complex system will have unintended results: some positive, some negative, but always unintended. “The Importance of Individuals” posits that every change in human history is the result of single individuals making decisions which influence others. Sometimes those individuals stir up a grass-roots movement and sometimes those individuals are in positions of great power but it is still one person making one decision and taking one action that leads to change. That person may be unknown to history, but the power to change the world is housed within every individual.

Most of the essays looked for theories that tied other things together. Natural selection, for example, explains so much of how the world works. Before Darwin, we had no coherent scientific explanation for why some animals and plants thrive while others go extinct. It seems obvious to us today, but it is hard to look back and realize how our understanding of the world transformed with the publication of Origin of the Species. The depth, elegance, and beauty of the theory is how it draws together so many disparate facts and gives them context and meaning. No other theory had as many essayists in the book, but most of the theories explored shared that “Aha!” factor, that feeling of, “Now this helps other things make sense.”

This Explains Everything can look intimidating, from its list of powerhouse contributors to its imposing 400+ page length to its intellectual subject matter. However, this book should not scare you away! First, most of the essays are short, many of them less than a page long. It is a great book to snack on. Read a few pages, put it down and let them digest, then pick it up again and read a few more. If one essay is not to your liking, move on! Second, the editor and writers have worked incredibly hard to make this accessible to people with curiosity and interest. I won’t pretend that it is meant for children. Adults with an interest in science, both physical sciences and social sciences, will find the book speaks to them. It may not actually explain everything. But it does open a window to the minds of those who are trying to find and grapple with the explanations for the world we live in.

The “question of the year” has been turned into a book for several years now. I plan to check out others in the series at a later date. Also, visit www.edge.org to sneak a peak on the conversation for this year! Provocatively, it is titled, “The Last Question.”