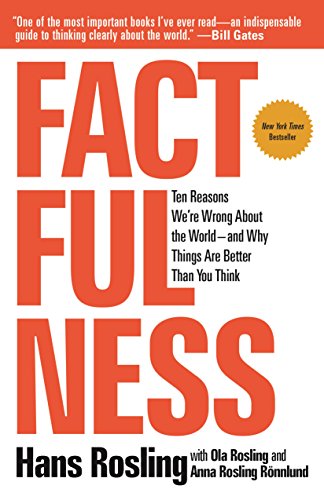 Nonfiction: Factfulness: Ten Reasons We’re Wrong about the World–And Why Things Are Better Than You Think, Hans Rosling, with Ola Rosling and Anna Rosling Ronnlund

I once thought I was smarter than a chimpanzee. I am, after all, human. I can read a book. I can work with a computer. I can type a review of a book I read on a computer. Those are all things a chimpanzee cannot do.

Then I read Factfulness by Hans Rosling, et al, and I am no longer so certain of my superiority to chimpanzees. In fact, the book unfavorably compares my answers to its opening chapter quiz to the answers given by chimpanzees picking at random. And the reality is that I did not know as much about the world as I thought I did.

Perhaps you don’t either. The quiz asks thirteen multiple-choice questions about the world. The correct answers come directly from UN statistics on disease, wealth and poverty, education, birthrates, life expectancy, and other information that most of us would deem important. Questions include: “In all low-income countries across the world today, how many girls finish primary school?” [a) 20%, b) 40%, c) 60%] and “How many of the world’s 1-year-old children today have been vaccinated against some disease?” [a) 20%, b) 50%, c) 80%], and “How many people in the world have some access to electricity? [a) 20%, b) 50%, c) 80%]. If you picked answers at random, the way a chimpanzee might do, you would expect to average 1 out of 3 correct answers. Most of us do much worse. By the way, in each of those questions, the correct answer is the largest number. Sixty percent of girls worldwide finish primary school (additionally, the average number of school years completed by 30-year-old women is 9, only one behind the 10 years completed by 30-year-old men on average). Eighty percent of the world’s babies have had at least one vaccination. And eighty percent of the world has access to at least some electricity.

This is not to say that everything is great or that there are no challenges. Rosling uses the analogy of an infant in an incubator. A premature infant may be put in an incubator and after a week go from 2 to 3 pounds in weight. That does not mean we should remove the baby from the incubator. Things are not yet good. But they are improving. They are on a positive track. We have reasons to be hopeful.

Rosling uses examples from his long career in public health and his own life growing up in Sweden to make his points. As a child, he fell into an open sewage ditch and almost drowned. In Sweden. It was a time when modern sanitation facilities were uncommon and there were no laws requiring open ditches be fenced off to prevent toddlers from wandering into them. Those days are long gone in Sweden–but not so long gone that he could not remember them. He equated the Sweden of his childhood to Egypt of today. His grandparents were born into a Sweden that had more similarities to present-day Lesotho, Africa, (one of the poorest countries in the world) than it does to the current modern wealthy country in Europe. Other countries around the world have made an even faster transition from poverty to wealth: Malaysia and Singapore and South Korea among them.

In fact, most people in the world live in “middle income” countries. That is not to say they are “middle class” in the American or European sense, but neither are they crushed by the total poverty that may have been their lot a generation ago. They have enough money for regular meals. They have access to enough electricity to cook their food. They can afford decent shoes. Their children don’t have to work and are instead in school, offering hope for a still better future. They may even be able to take their families to the occasional movie, or afford a small television. They have indoor plumbing. These basics may not be the stuff of dreams for Americans, but they are life-changing for many around the world, and they are now commonplace where just a few decades ago they were unattainable.

So why are we so ignorant about the world? Rosling posits several reasons. One is simply that we haven’t been told. Educators often work from outdated textbooks which still show data from years ago. Journalists cover “news,” and small, incremental, steady improvements don’t qualify as newsworthy. A plane crash is news–it is dramatic, it is unusual, and it catches our attention. But the takeaway should be that it is rare. 2016 was the safest year for air travel in history. There were only 10 commercial airline crashes worldwide, despite there being more flights than ever before. That is good news, but the safe arrival of a plane is not going to get much attention from headline writers.

More challenging is overcoming our own biases. If you were to ask most people from wealthy countries, they would reflexively say that highly religious people have more children than more secular people. That is not entirely wrong, but it is hardly cut and dried. Iran, home of the Ayatollah and ruled by theocracy, has a lower birthrate than the United States. A much greater predictor of birthrate than religion is income. Extremely poor people tend to have more babies for two reasons: 1) the need for child labor, and 2) the need to replace children who die young. As Iran and other countries have moved from low to middle income, child labor has become less necessary and infant and child mortality has decreased significantly. Rather than assuming that someone’s religion (or ethnicity or skin color or any other artificial distinction) means that they are destined to a particular kind of life, we should look at the facts and let them speak to our expectations. Reality can be very different than we think.

I wholeheartedly recommend Factfulness! It will make you think. It will give you hope. It will help you see the world differently. I also recommend visiting the authors’ website https://www.gapminder.org/dollar-street/matrix to see comparisons between people of similar incomes around the world. If you think people around the world are very different, this website will challenge your assumptions. You can also follow up by watching the authors’ TED Talks (one is at https://www.ted.com/talks/hans_and_ola_rosling_how_not_to_be_ignorant_about_the_world). If you are curious about the world, if you are depressed about the current state of affairs and thinking things are just going from bad to worse, or if you begin to think you know more than a chimpanzee, this book is for you.