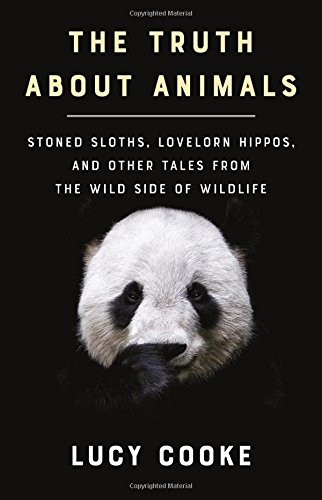 Nonfiction Science: The Truth About Animals: Stoned Sloths, Lovelorn Hippos, and Other Tales from the Wild Side of Wildlife, Lucy Cooke

Lucy Cooke’s engaging book The Truth About Animals is one of those delightful books that can make you laugh out loud and then cringe in horror a moment later. Filled with research, personal anecdotes, quotes from historical naturalists (and sometimes “naturalists” in the absolute broadest sense of the word), contemporary scientists, the book looks at the lives, myths, and behaviors of several types of animals. In the process, Cooke reveals more than a little about the human animal as well.

Cooke is a filmmaker who has worked on many nature shows and has an advanced degree in zoology from Oxford. Her writing is fresh and engaging, full of humor. She pokes fun at animal myths and the creators and propagators of those myths. In a hilarious chapter about beavers, she shares a long believed story that beavers will, when being chased by hunters, bite off their own testicles and throw them at the hunters in order to end the hunt (the theory being that beavers knew their testicles were the reason they were being hunted). Delightfully, one of the naturalists who wrote about this “behavior” of the beavers coined a word to describe it: eunachate. (It is a travesty of modern communication that the word “eunachate” has not entered the common vernacular, but perhaps there is still opportunity.) Happily, beavers do not self eunachate in order to dissuade hunters, but the beavers’ musk glands (often confused by early naturalists with gonads) can be used for a number of unexpected purposes, including a source of “all natural vanilla flavoring.” That’s according to the FDA–after all, it is all natural. Early naturalists also ascribed medicinal properties to these glands. In a brave work of journalistic thoroughness, Cooke actually ordered and ate a beaver’s musk gland to test the efficacy of it as a headache remedy. It did not alleviate her headache, but it did result in a sustained period of passing gas with an extraordinary smell.

As the above paragraph shows, Cooke’s tone is earthy and sometimes ribald. The Truth About Animals would be a fantastic gift to a precocious, nature-loving middle schooler. It is written for adults. Cooke, however, is a gifted story-teller, and although most children (frankly, many adults) might need a dictionary at hand for the occasional new vocabulary word, her stories engage and enthrall the reader. I would love to have had a book like this as a tween, and at least one of our children would have adored it at that age. Parents should review the book first to gauge its appropriateness for their own children, of course, since every family is unique.

Many animal myths originated as moralistic parables. Penguins are sometimes still upheld as examples for “Christian” marriage because the belief is that they mate for life. (This myth was at the center of the movie, “March of the Penguins,” which despite Morgan Freeman’s narration was not particularly accurate in depicting penguin life.) Reality is somewhat different. Some penguin species are more faithful than most creatures. Others, not so much. Female penguins have been observed trading sex for nesting stones from unattached males. Both male and female penguins have created long-term same-sex bonds. Males, in the heat of mating season, have even been observed having sex with dead bodies. Although we humans may want to use animal behavior to illustrate “good” and “evil,” Cooke makes the point often that these illustrations tell us more about ourselves than they do about the animals. The animals are neither good nor evil. They are just animals.

Some myths come from observing animals out of context. Chimpanzee behavior has long been misunderstood because their behavior in captivity is radically different from their behavior in zoos. Pandas in the wild act nothing like pandas in captivity, which bodes ill for hopes to raise captive pandas and introduce them back into nature. Human actions also impact animal behaviors and even territory. Colombia now has a wild population of hippos, thanks to deceased drug lord Pablo Escobar. Leftover from a menagerie on his property, escapees are finding the jungles of South America to be even more hospitable than their native African range (fewer droughts and smaller crocodiles are among the benefits).

Human actions have led to some insights, though. Would we know that sloths could swim if a biologist in the 1920s hadn’t tested the theory by tossing some into a river? Fortunately for the sloths, this experiment succeeded. Other experiments were much more cruel to the animals: starving them, blinding them, surgeries without anesthetic, etc. Efforts to weaponize bats during World War II failed spectacularly when wayward bats armed with bombs blew up the facility where they were being held–and sent the general’s car into oblivion. And some experiments, thankfully, did not succeed: efforts to create a human-chimpanzee hybrid never came to fruition.

The Truth About Animals is a fun book. I laughed aloud as I read some passages, and laughed again when I read those passages aloud to my family. Cooke is a wonderful writer. The book is thoroughly researched but never pedantic. I wholeheartedly recommend it.