The Masked City, Book 2 in The Invisible Library Series

The Burning Page, Book 3 in The Invisible Library Series

The Lost Plot, Book 4 in The Invisible Library Series

The Mortal Word, Book 5 in The Invisible Library Series

How are you going to celebrate National Library Week? Try reading a book about or set in a library or better yet, a whole book series about libraries! I have read the first three books in Genevieve Cogman’s series about The Invisible Library, and I am very eager to catch up with the rest of the stories. Cogman’s books are fun, with a kick-ass heroine, a dragon side-kick (he looks human most of the time), a Sherlock Holmesian detective, and rich settings in imaginative worlds that are both fun and fantastic. The Invisible Library: a fantastic series to read in celebrating National Library Week.

Along the way she picks up an assistant, Kai, a young dragon who wants to become a librarian. Dragons can choose to appear as human, and Kai typically remains in human form. When needed, Kai can pull some dragon magic to save the day. Usually, though, it is Irene saving him.

Irene is opposed by a fearsome entity, a former librarian who has forsaken his mission and has turned to stealing books for his own purposes. As the book series develops, we learn that her enemy is trying to replace the library with a creation of his own. He finds, though, that Irene is more than formidable, and that whatever dangers she may encounter in the multiverse, she is capable of handling herself and rescuing her friends.

Cogman’s worlds are creative and well drawn. Irene may find herself traveling through time, traveling around the world, or traveling between worlds. She may find herself in a modern car, a steampunk dirigible, or riding a dragon. Wherever she goes, though, she is armed with her quick wits, her sharp tongue, and both the bravery and the skills to confront any challenge.

Although the series is written for adults, it is quite appropriate for teens as well. Irene is no wilting flower, no damsel in distress, no woman waiting for rescue by a man. She is a bold and sometimes headstrong heroine. She is quite capable of rescuing herself and leading her assistant bravely into battle when necessary. 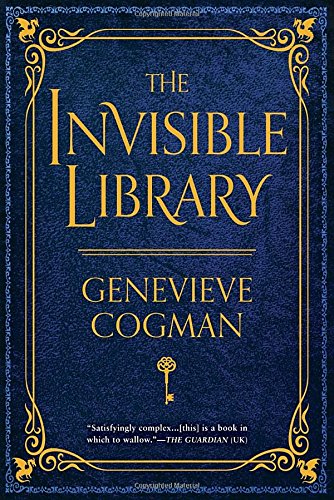 What book will you read to Celebrate National Library Week?